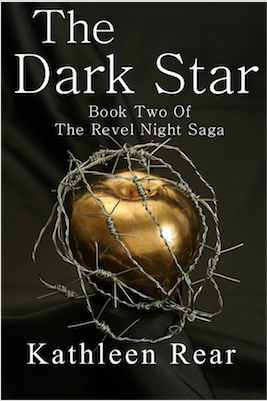 In the writing of a story there are a lot of scenes that for one reason or another get cut out of the final manuscript. This is one of those scenes.

It was originally in the chapter where Stella pays a visit to her ex-boyfriend Jonathan and his now wife Clio. One of these days I’ll probably write the story of how Clio tracked Jonathan to Big Sur and post it in my Short Stories section here on the website.

Anyway, this is the scene in which Clio and Stella have a little girls only chat…

OUTTAKE FROM THE DARK STAR!

“Well,” Stella said, a wicked gleam in her eyes, “before the epic Demonic beat down, there was one other thing I wanted to talk to you about.” She turned to Clio. “It’s of a personal nature, I was wondering if we could speak in private?”

“I…uh, of course. Would you like a tour of my studio while we…uh…”
“Excellent! I would love to see where all this magic happens.” Stella gestured to the painting of the Chrystal Cave.

Lady Stella gave Jonathan a hug in parting and her promise that they would visit again soon. Clio was glad to see the two of them at peace with the past. Jonathan had confessed his nervousness to her and had asked if she was okay with welcoming his old love here. Clio had laughed. From her point of view she owed Lady Stella a great debt.

Had she not ended her relationship with Jonathan that day twenty years ago he would have never thrown away the ring he had unknowingly enchanted with his deepest desires. The ring had found Clio, and Clio had used her gifts to track Jonathan. Smiling she toyed with that same ring now as it sat on her finger.

“…And I’ll bring Juno when I come next and you can show her the city!” Stella was saying to Ellie who hugged her tightly. “She will love that!”

Clio led the way to her studio. Hearty colorful grasses and rhododendron grew amongst the rocks lining the stairway down. Her studio was just a shack at the bottom of the rocky hillside their home sat upon but Clio was immensely proud of her little space. The grooved siding had faded to a silver patina, and the doorway, found at a salvage yard, was a carved masterpiece of vines, fruits and leaves.

“Jonathan and I built it together before Ellie came.” Clio opened the door for her guest. “Welcome.”
“How wonderful, and the view, my god!” Lady Stella walked to the picture window and looked out over the cliffside vista. The sheer drop on just the other side of the window afforded an unobscured view of the ocean’s churning waters as the waves dashed themselves upon the rocks below. “I can see where your inspiration comes from.”

“Thank you Lady…” she stopped herself, holding up her hands. “Just Stella. Sorry. One hundred-seventy years of ingrained servitude is hard to countermand.”

Stella nodded sadly. “I will never get used to, nor approve of, the near caste system of Faerie.”

As the child of servants Clio was only allowed to aspire to that which was her inherited station, she considered herself lucky to have found such a resplendent life in the Mortal realm.

“I have the feeling you wanted to speak to me regarding a matter you’d like to keep between us?” Clio asked, unable to quell her curiosity a moment longer.

“Yes, I…” She began then stopped; looking back out the window she seemed to be searching for words. “Well, you know I’m a halfling?”

Clio nodded, clueless as to what could be coming next.
“Have you and Jonathan… What I wanted to um…ask is,” she floundered again her cheeks flaming red. “And please, you can tell me if it’s none of my business, okay?”

“I assure you, whatever it is I’ll answer as truthfully as I can.”
“Okay. Right.” Stella cleared her throat. “Have you and Jonathan talked much about the disparity of your life spans?’

Clio could see now why Stella had been wary of broaching such a subject. It was a concern, one she and her husband had discussed recently in fact. Yes Faeries aged, though at a rate greatly slower than mortals. And before marrying Jonathan the goal of ‘growing old together’ was not a concept she’d been familiar with. Clio took a breath and sat on the stool in front of her large easel.

“To me he shall always be the beautiful young man who I tracked to the hiking trail in Big Sur,” she said toying with the turquoise ring on her left hand. “I had not realized our differences in that way bothered him so deeply until he brought it up recently.”
“You fought about it, didn’t you?”
“Yes. It makes him feel…” She shook her head. “But there’s nothing to be done but accept it.”
“What if I told you otherwise?”

Clio just blinked at her guest.
“Nox and I have a similar issue. As a full blooded Faerie like yourself Nox’s life span is much longer than mine as only a halfling.”
Clio nodded, with Stella so far. “Yes?”

“Nox and I have found a way to slow my aging and bringing my lifespan more in line with his.”
Clio’s jaw dropped open, she could feel her eyes bug. “Truly?”

“A warning though, I don’t know how it will affect someone who is totally Mortal like Jonathan.”
“Is it a spell?”
“It’s old magic,” Stella said. “Blood magic. The bond that is formed will affect you both.”
“Bonded by blood shed, forever tied until one is dead,” Clio recited.
“Yes.”

Clio’s thoughts whirled. Year by year her husband would grow older while she stayed physically the same and she could see it would be a problem as they went on. But blood magic was dangerous and the possibility that Jonathan, her heart, could come to harm was to be considered above all else. Though the chance to have not just years but hundreds of years together…

“What do I have to do?”
~~~
“What did you and Stella talk about?” Jonathan asked later that evening.

Clio padded into their bedroom, a glass of red wine in each hand. She climbed up onto their king size mattress and handed her husband a glass.

“Oh nothing,” she said. “Just girl talk.”
His dark eyes narrowed. “Uh huh, that’s what worries me.”
Clio laughed. “It was nice to see her?”

Jonathan looked into his glass, gazing into its pool of claret red. “She’s troubled. Her family could be in danger, and Nox is… Well he’s the Boogeyman for God’s sake! It’s not necessarily a life of peace for her, is it?”

“And you worry.” Clio added.
He nodded and sipped his wine. “Hey! What are you trying to pull here!”
“What?”
Jonathan held up his glass. “You know what!”
“I don’t!” Clio retorted.
“We were saving this bottle for our anniversary, remember?”

Clio shrugged. “I thought we would celebrate a month early. Things have
been…I don’t know.”
“Yeah, and I’m sorry,” he sighed. “I knew about our age difference going in and it’s not like you can help that you’re immortal.”
“If you could be too, would you?”
His expression was contemplative. “So long as I had you and Ellie, yeah I would.”

“I love you, my heart. My Cormeu.” She looked deep into his eyes and his body relaxed as he went into a trance. “Our bond by blood that I will shed shall be your life until I am dead.” She said the ancient spell in the Elder language of the Fae and the tender kiss she gave him sealed the magical bond between them.

Jonathan blinked his eyes dropping closed for a moment then he snapped awake again and smiled at his wife, unaware of the magic imposed upon him. Clio knew she’d have to confess someday, even in Hollywood a man who didn’t age would be noticed after awhile.

“Do I get any other early anniversary presents tonight?” he asked, wiggling his brows suggestively.
She looked up at him through her lashes. “Drink your wine first and you can have all the early presents you want.”

Jonathan downed his glassful in three hasty swallows then set it on his bedside table. Laughing, Clio jumped into his arms.
“Uh oh, what happened here?” he asked, holding up her bandaged forefinger.
“Um… pallet knife,” Clio said.
Jonathan brushed a kiss over her finger then into her palm.

“I want you to know that however long we have, a day, a year, or forever, I will never stop loving you, querida.”
“And I you,” Clio answered. “Forever.”

THE DARK STAR is available on Kindle & Kindle Unlimited 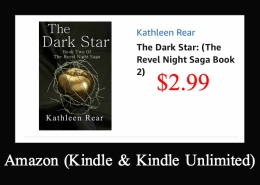