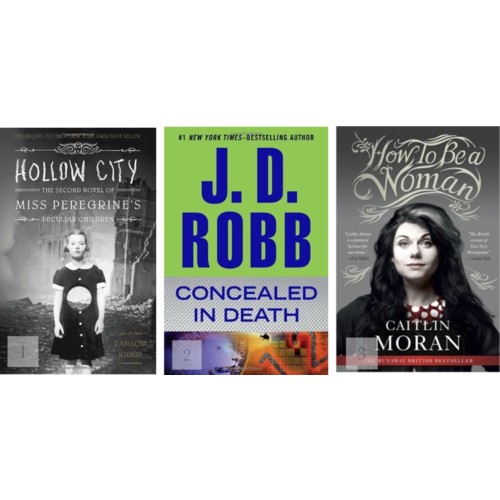 Hollow City by Ransom Riggs
“Some truths are expressed best in the form of myth.”
“Strange, I thought, how you can be living your dreams and your nightmares at the very same time.”

Concealed in Death by J.D. Robb
“In a decrepit, long-empty New York building, Lieutenant Eve Dallas’s husband begins the demolition process by swinging a sledgehammer into a wall. When the dust clears, there are two skeletons wrapped in plastic behind it. He summons his wife immediately—and by the time she’s done with the crime scene, there are twelve murders to be solved.”

How To Be a Woman by Caitlin Moran
“We need to reclaim the word ‘feminism’. We need the word ‘feminism’ back real bad. When statistics come in saying that only 29% of American women would describe themselves as feminist – and only 42% of British women – I used to think, What do you think feminism IS, ladies? What part of ‘liberation for women’ is not for you? Is it freedom to vote? The right not to be owned by the man you marry? The campaign for equal pay? ‘Vogue’ by Madonna? Jeans? Did all that good shit GET ON YOUR NERVES? Or were you just DRUNK AT THE TIME OF THE SURVEY?”