Enjoy a special excerpt of THE FALLEN SHADOW. Out June 20 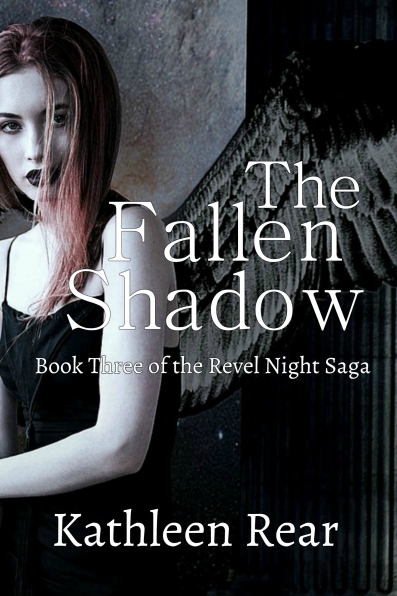 You never know who you will meet on Revel Night….

The boathouse was a favorite haunt of Tynan’s; it had all the characteristics a Boogeyman needed. Dark, damp and decrepit, it was a place where Mortal teenagers came looking for a little mischief. Something he was more than qualified to provide.

It was a two level Adirondack style, the upper level a three-season porch and the lower level a sagging launch, the water lapping up over the end of the dock.

He assumed it would be vacant until later, the bonfire having just been lit, so he was surprised when he heard voices below. Melding into the closest shadow, he slipped through the darkness and downstairs.

“There’s a ghost that haunts this place.”

A boy in what Tynan guessed was a slapdash attempt at a Dryad costume and a girl dressed as an Angel was on the dock.

“Have you ever seen him? Does he appear often?” she asked.

“Don’t worry, I’ll protect you.” The boy took hold of her shoulders and clumsily attempted to kiss her. He was more than a little drunk. The girl turned her head and backed away.

“This was foolish, I should go.”

“Just one kiss, Angel baby, please!” He grabbed onto her wrist and laughed when her attempt to pull away failed.

Tynan was of a mind to intervene before the boy carried things too far, perhaps manifesting as the ghost the boy had mentioned would break things up. Before he could, the girl balled up her fist and executed a perfect right hook, landing it square on the boy’s jaw. He stumbled back and fell with a splash into the water.

Watching as he flailed in the lake her hands on her hips, the girl’s wings flapped a few times in agitation. It was then that Tynan realized the girl wasn’t dressed like an Angel she was an Angel! He must have made some kind of sound because she spun to face him, her fists at the ready.

“Who is there?” she demanded.

She was lovely. Long red-gold hair fell in waves to her waist. The tumbling mass framed a heart shaped face sprinkled with freckles; her eyes reminded Tynan of buttery brown caramel. It was no wonder the boy had wanted so desperately to kiss her.

“Oh! Hello there,” she said, the hostility draining from her face.

She was looking right at him, she could see him! Not as an apparition but as he truly was. Further proof she was an Angel and not human.

He stepped forward emerging from the darkness and she took a startled breath, her hand fluttering to her mouth. It was a reaction Tynan was accustomed to but it pained him that he’d alarmed her.

“My Heaven, you’re a Shadow aren’t you?”

Tynan blinked; surprised she had not run in terror. “I… uh, yeah…yes I am.” She had the sweetest smile. He felt his palms go clammy.

“Are you Nox Tenebris?”

“Oh.” She blushed. “I’m sorry. My Father said he was the Master and it felt like…” She rolled her eyes and blew out a breath. “So, you must be Tynan?”

He experienced a thrill at her not only knowing but saying his name. “Tynan Tenebris,” he said, executing his best courtly bow. “A pleasure, Mistress.”

He took a step closer but noticed her breath was starting to steam so he halted. The cold spots could not be helped; it was his nature to leech the warmth from the air surrounding him.

Sputtering and coughing up lake water, Livia’s unlucky swain hauled himself up onto the dock and crawled to a post. He unsteadily got to his feet and shot Livia a glare. “Bitch!” he snarled. “I should kick you in the ass for that.”

Tynan stepped forward putting himself between the boy and Livia. Black mist uncoiled from his fingertips and reached out toward the boy, his body deformed into an emaciated hunched posture. His face altered, eye sockets hollowing to black, his mouth spread into a gapping maw lined with sharp silver fangs.

The ominous creature’s voice cut like a cold dagger, “Flee, mortal, or face the Wraith!”

The boy practically injured himself running away, screaming in terror.

As the Wraith dissipated and Tynan drew himself back into his real appearance, he suddenly realized he might have done more harm than he intended.

“Mistress Windancer, forgive me if I…”

Her mouth was agape and she stared at him wide-eyed. “That was magnificent!”

Her hands were clasped over her heart. “Oh yes! Oh terribly frightened, yes!”

Tynan tipped his head and gave her a befuddled look. “No offense Livia, but you are very strange.”