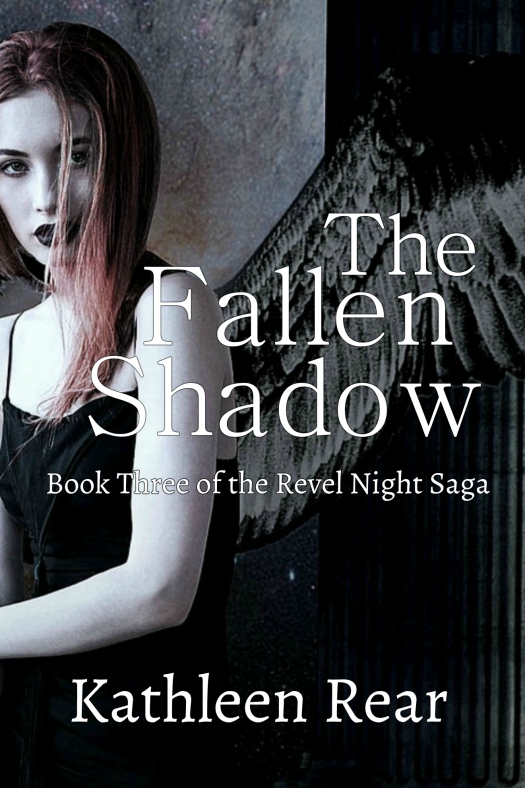 I’m excited to announce THE FALLEN SHADOW: BOOK THREE OF THE REVEL NIGHT SAGA is out today!

I’d like to wish a happy book birthday to some amazing characters!

Tynan Tenebris:
Black mist uncoiled from his fingertips and reached out toward the boy, his body deformed into an emaciated hunched posture. His face altered, eye sockets hollowing to black, his mouth spread into a gapping maw lined with sharp silver fangs. The ominous creature’s voice cut like a cold dagger….

Livia Windancer:
“Where did you get off to?”
She pushed the food around her plate and gave a noncommittal shrug. “Nowhere really, just, around.”
“You know,” Her father peered at her with narrowed eyes, “the tip of your nose gets red when you lie, just like your mother’s used to.”
“It does not!” She shot him a guilty glance and rubbed the tip of her nose.
“So you’re saying you have no idea why your life signature was all over the Stairway I found to the Mortal realm?”
Her shoulders sagged. Busted.

Conah Windancer:
Conah sighed and slumped back into his seat at the table. He scrubbed his face with his hands.
“That went well,” he said to the portrait of his wife.
He was Heaven’s most decorated warrior, he commanded the elite Golden Skein; his reputation was both respected and feared, but he was totally out of his element when dealing with his own child. Daughters, it turned out, didn’t take orders well, if at all.

Aurora Dawnbreaker:
Suddenly Aurora’s face was a mere inch from hers, “If you think,” she spat, “that you can win Cassian from me then think again!”
“That’s…no, that’s not what…” she stammered, Aurora was seething, Livia took a step back. “I don’t want him!”
“Good!” Aurora said. “Keep it that way. Challenge me, however, and I’ll knock you out of the sky!”

Cassian Stormcloud:
Cassian had a strong mind. Yes, he was upset at his parents infestation, horrified at what he had seen the Serpents do to his people, but instead of fueling his fears, it strengthened his resolve to eradicate this enemy from the Angelic realm. He was willing to do anything, even if it cost his life. The guy was a good soldier, Tynan had to admit, a good leader. He was still going to kick his ass.

All your favorites from THE BRIGHTEST STAR & THE DARK STAR are back too: Fraxinus & Tam, Nox & Stella, Juno, Sibah, Sam, and of course your favorite troublemaker tomcat, Jones!

You can find excerpts and book trailers in the EXTRAS section, go have a look!

I hope you enjoy Tynan and Livia’s story! The hardback will be available in July so stay tuned to the blog as well as my social media for more info!