When our 16-year-old son asked if he could visit his girlfriend in Denmark we said, after many questions were answered, yes.

The main question was, is our son mature enough to handle traveling alone?
We have traveled quite a bit as a family, our son had (with us) navigated security queues, airports and luggage carousels before. We were confident he could deal with that part. That said, when we traveled to Boston this summer we made him in charge of checking in and finding our gate as a little practice run for being alone. He did well, so that helped alleviate that concern.

He would be staying with her family during his visit, we e-mailed her parents and got their address and phone number. Full disclosure: Yes, we did look up their address with Google maps and viewed their house with street view (charming! lovely neighborhood!). It was a little embarrassing when I overheard the Skype conversation wherein my son told his girlfriend that we were stalking her parents house on the internet.

Dear readers, I ask you, would you not? I also must to confess that my powers of parental stalking were only just getting warmed up during this whole venture. I am the master in that Dojo!

Travel abroad, as you know, requires a passport. Most teens don’t have one and you’ll have to apply for one well ahead of their scheduled departure.
Here is a link I found helpful in getting the process started. Travel. State.Gov (FAQ)
I think most teens should get their passport whether they intend a trip abroad or not. It’s a great form of identification before they are able to get their driver license. You never know when preparation and opportunity might strike; as did the case with my son’s trip. Had he not already had his passport the “pain in the butt factor” would have been far greater.

Another concern we had about him traveling alone was the connecting flight(s) he may have to make during his plane travel to and fro.
We solved this by getting him a flight with only one connection needed and within the United States. I do know that English is spoken in most European countries and especially in airports by the staff there, but knowing he could ask questions without having any trouble put this Mother’s mind at ease.

The other thing that eased my nerves was this great app, Flight Track Pro

You can get alerts if a flight is delayed and track where your child is while flying. Professional grade parental stalking, I tell you! 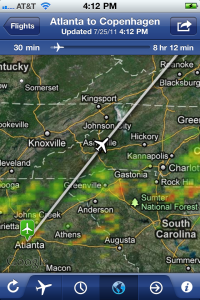 They’ll need their phone while away, upgrading your teens cell phone to an international package that you can turn on before they go and turn off when they get back is worth the expense. If there is an emergency or hiccup in their travel plans, you will be able to help.

In Part 2 I’ll talk about money exchanges, credit/debt cards for minors, packing light for teens and, how to talk your son into taking dress clothes.

If I can answer any questions please post them in the comments!